Renowned as the most visited modern art gallery on the planet the Tate Modern Art Gallery is no ordinary contemporary and international art space in London. As the most successful part of the Tate group of galleries which includes Tate Britain, Tate St. Ives and Tate Liverpool this engaging venue dedicated to showcasing modern art drew an impressive 5.3 million visitors in 2012. Tucked away in Bankside, Central London the venue also holds the distinct honor of housing British art dating from the 1500’s to modern times. Housed in what was once the Bankside Power Station the iconic building was renovated and converted to its present splendor by the Herzog & de Meuron architect duo before it was declared open to the public in 2000.

Divided in to seven floors and numbered accordingly the first four floors of the venue are dedicated gallery spaces. The main collections on show at any period of time are contained within half of the floor space that has been divided into wings titled according to the theme of the exhibits or particular subjects. 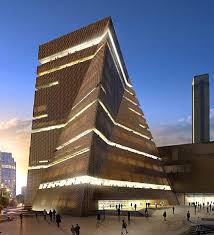 The Tate Modern’s current exhibitions include U.S artist Tony Oursler’s multimedia interpretation of ghostly figures dubbed The Influence Machine, the inter-war decade’s Constructive Art collection named Structure and Clarity while Setting the Scene contains five rooms full of “staged” installation artworks from a variety of contemporary artists.Oskar Fischinger ‘s multimedia film presentation is also on show at the Tate till June, 2013 in addition to special exhibitions dubbed Transformed Visions, Poetry and Dream, Lothar Baumgarten and Energy and Process. Last year’s big success was the Damien Hirst Exhibition which drew 3000 visitors daily to witness the 1991 work by the artist featuring a shark immersed in formaldehyde in one of the Tate’s three tanks. Named The Physical Impossibility of Death in the Mind of Someone Living the artist’s 1990 hit A Thousand Years was also displayed at the Tate in 2012.

After a tour of the venue guests can pick up souvenirs of their visit at the museum shops or simply head to the café, espresso bar or museum restaurant for a hearty meal.

Visitors in search of the best suite hotels London has to offer should search no more than The Langham London for all their lodging needs. Ideally located in a strategic location this stylish rest is also one of the luxury hotels London city proudly ranks among its best as the venue is also Europe’s first grand hotel.

Enjoying a Day Trip to Potsdam

Water Sports in the Maldives

Water Sports You Cannot Miss in the Maldives